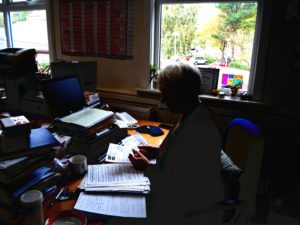 A great many of Caring Together’s blog-posts relate to the groups and projects that we run and organise, in part, I suppose, due to their obvious visual impact. However, much of Caring Togethers work is behind the scenes and out of camera shots. The information, advice and individual support that we offer is a vitally  important aspect of our work and is often the entry point into Caring Together for many people.We have made a decision to start highlighting this work on our web pages as the individual stories give a reflection on both the range of issues that we encounter and can help with, and also the individual experiences of many of our members. The following is one such tribulation experienced by a member that seems pointless and unnecessary.

Caring Together has recently been providing support to a long term member in relation to his benefits. The man, in his early sixties, had been receiving ESA as he was not well enough to work. He underwent a review assessment of this benefit and was advised by letter that he had not secured enough points and his benefit was stopped. He contacted Caring Together who helped him in applying for a mandatory reconsideration and explained to them why he should qualify given the circumstances of his health. Caring Together also helped him in instigating a PIP claim. The member was advised by ESA to put in a claim for JSA. The member was then admitted to hospital with a life threatening condition. While in hospital he received a letter stating that he had been granted JSA. The member explained the situation to staff at the hospital who gave JSA the details of the members’ condition. When the member came out of hospital Caring Together also contacted JSA and provided them with discharge evidence.
The member contacted JSA and cancelled the claim as he was unavailable for work. He tried to make a new claim for ESA but was informed that he would not be able to do this as reconsideration was still in progress. He cannot put in an appeal until the mandatory reconsideration has been turned down.

He has had no income since the 20th September and has survived up until now on a small amount of savings. This issue is ongoing.

Caring Together continue to support him in this matter and in a variety of other ways. 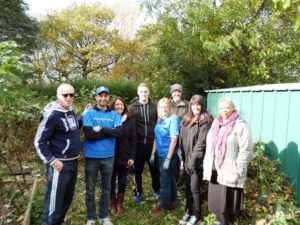 Caring Together has had an Allotment for a number of years now and as anyone who has every had one of their own knows, they take a lot of maintenance. Our Allotment has been looking a bit overgrown in places recently and the paths around the wheelchair accessible raised beds were covered in a lot of moss. To the rescue came 6 volunteers from Zurich insurance who, in a short period of time, and helped by Caring Together Allotmenteers Ben and Leah, brought the Allotment back to life. They took part in this as part of the Zurich Cares Community Challenge which partners Zurich employees with worthwhile community causes. Many thanks to Zurich for this and a special thanks to those volunteers who took part.

Tuesday was World Mental Health Day. Caring Together celebrated the day by using it to launch our new singing project which will run for 8 sessions up until the finale event on the 1st December. It has been well documented that group singing has a positive impact upon Mental Health. Recent research has shown that “ people who (sing) in a choir had a stronger sense of being part of a meaningful group and there is a suggestion that there is something unique about the synchronicity of moving and breathing with other people.”

It certainly felt that way on Tuesday at Caring Together. The Singing Project, collaboration between ourselves and the University of Leeds Music Society was a great success and everyone left with a feeling of a time well spent. A huge thanks to all who took part, both members and students and to Lisa Argyle, Hannah Salt, Emma Dolby and Jonathan Chard for all their hard work in organising the project. 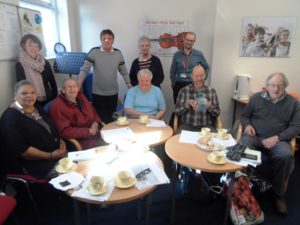 The Remembrance project, a partnership between Caring Together, the University of Leeds and Abbey House Museum has finished three of its four sessions (an extra session was added due to demand). Those attended shared memories of loved ones and how they remember them and how ways of remembering have changed over time and yet how some things remain constant.

All of Caring Together Groups went out for meals recently to various places around Leeds. If you or anyone that you know are interested in joining or finding out more about the groups, please phone the office and speak with Lisa, Valerie or John. The groups are open to anyone in the Woodhouse, Little London and City Centre areas and in some cases further afield. 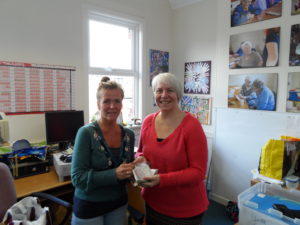 Following the hand over of monies raised from Sam Jones to Lisa Argyle a certificate of appreciation was presented to Aspire Community Benefit Society as thanks to residents of Delph View and Craven Road, family, friends and staff for their contribution in our sponsored stroll in September for walking, supporting us and baking on the day and raising much needed funds of £711.08. We have not finalised our grand total as yet but we are predicting it will be just over £2K. Thank you to everyone for your support. 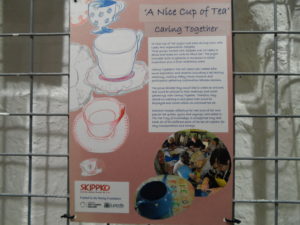 Lisa and Dot from Caring Together recently attended the Skippko exhibition of 30 years of Arts Projects in Leeds. Caring Together were glad to be there and examples of joint project work undertaken over the years are shown here. Some great collaborative work, and we hope, much more in the future. 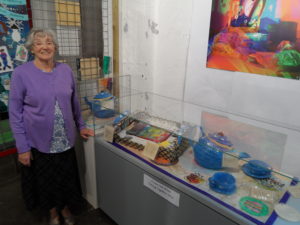 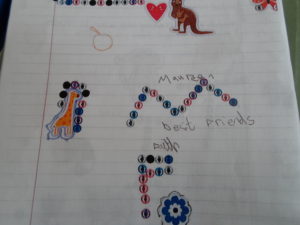 The arrival of letters in the charity sector isn’t always the highlight of the day but today’s batch certainly cheered us up.

Caring Together is delighted to be part of a new partnership with CLASSS (Community Leeds After School Study Support), it is small charity working with children aged 6 – 8 years. One of our volunteers is a volunteer with them as well, as their classroom lead for class 1. Eleven children in her class have started writing to eleven of our members, once every half term, and our members will then write back to them. This is a lovely inter-generational initiative that will give both generations a chance to practice, and for some rekindle,  their letter writing skills, and to also have a new friend and pen pal in the community 🙂

The letters were very decorative with some letting us know which animals and subjects in school they liked and another stating he was a ‘cheeky monkey’.

It was the International Day of Older People on the 1st October. Caring Together, with funding from Leeds Older Peoples Forum, held an interactive film afternoon last Friday to celebrate this. The surprise film was Grease and all present were supplied with lyrics of all of the songs and sang and moved along to their hearts content. A great time was had by all and popcorn and ice creams were given out at the interval. The mood in the room was upbeat and the film was brought alive by those participating with much laughter and smiles. Many found the film to be nostalgic, bringing back memories of the sounds of the fifties. Many thanks to Leeds Older Peoples Forum and to Little London Community Primary School for the loan of their projector and speakers.