Day 78 – We’ve always been blessed with shops in Leeds and for those wanting Designer labels then this is the place, but they’re not for me. I much preferred the Leeds of days gone by. At the top end of Town, there was no Merrion or St John’s Centres; the former being the site of Rockingham Street bus station and the latter Wade Lane and an open car park next to ‘Lewis’s’. The only shops I remember on Albion Street, apart from ‘Alexandra Overalls’ were ‘Pobgee’s’ florists and ‘Spalding’s’ sports shop from where Mum and Dad bought my first pair of Faber ice skates. ‘Marshall & Snelgrove’ was on the corner of Bond Street and thereon was a trail of posh shops prior to the opening of the Bond Street Centre.

It must have been around 40 years ago I bought a black silk ottoman coat from a jumble sale, the label inside reading ‘Madame Arthur, Court Dressmaker, 30 Bond Street, Leeds 1’ and I was intrigued to know the history of the coat and ‘Madame Arthur’ herself! There was a photographer’s shop where ‘Boots’ stands now where I deposited so many films, firstly the old reel ones from Dad’s ‘Box Brownie’ to my ‘Instamatic’ cartridges. In those days a film was left for processing to be collected a week later, by which time many photos were a surprise (some more surprising than others!). Windows were not overly dressed in the 60s but I remember ‘Leader’s’ on Bond Street displaying a mannequin wearing a sleeveless evening dress with a bodice covered in daisies. It was very similar to one worn by the vocalist with the Denis Langfield. Sound at the New Mecca; her name was Sandra Stevens and she became part of the ‘Eurovision Song Contest’ winners ‘Brotherhood of Man’.

‘Ann Corbett’ haute couture was almost at the corner of Bond Street where it met Albion Street. It stood next to a long showcase of photographs featured in the Yorkshire Evening Post and one could make a note of its number and pop round the corner to order a copy from their premises. I would look at the photos but gaze over my shoulder at the three or four unpriced garments. My sister bought her bridal headdress and veil from there and I purchased a cocktail dress for a ‘do’ from ‘Ann Corbett’; a layered silk georgette dress with back bow and streamers from the shoulders in royal blue and emerald (“blue and green should never be seen”!).

Further along was ‘Lafayette’ another posh shop with, again, no prices attached to their garments, one of which was always a wedding dress. ‘Cyril Livingstone’ on Albion Place was an establishment I would never have dared to enter. An elegant suit or dress in one window with perhaps a coat in the other and if one stopped to look, Mr Livingstone would appear and tend to the display but I’m sure in reality he would have been judging whether we could afford to buy (and we couldn’t).

Ross Furriers was a neighbour of ‘Lafayette’ but I can’t remember whether they weakened in the selling of maxi length white rabbit fun fur coats, popular in the early 70s. Over the road near the Milkmaid Cafe was ‘Paige’ – fashion which many of us felt more comfortable with. Lands Lane also had its share of fashion shops and one I remember in particular was situated next door to Betty’s Cafe. If one wanted to visit the lower sales floor a loud bell rang the second a foot touched the top step and we would be greeted at the bottom of the stairs with “Can I help you Modom?”. At the top of one of the Arcades was ‘Vivien Smith’ with its pretty print dresses and skirts but also a carousel of long-sleeved blouses with large tie bows. Made of a polyester crepe and fastening by a back zip they were available in every colour imaginable and I loved them.

‘Laura Ashley’ opened on Lands Lane too in the late 80s? I only ever bought from there on one occasion, for my good friends’ joint celebration of a Silver Wedding Anniversary, and two landmark Birthdays. My choice for the Summer celebration held at the Hotel Metropole was a long cotton dress and bolero jacket in a pale yellow and pink print, which I matched with delicate pink ribbed silk low-heeled courts and matching bag from Manfield. I was conscious of the fact that the dress armholes were rather big but thankfully, working at the Playhouse, their Wardrobe Dept. came to my rescue and altered it to fit in exchange for good quality biscuits and chocolates. I never wore Laura Ashley again as their dresses I found to be too small in their fit – or was it myself at fault??  More later…

Wonderful Maureen, and yes until next time…… 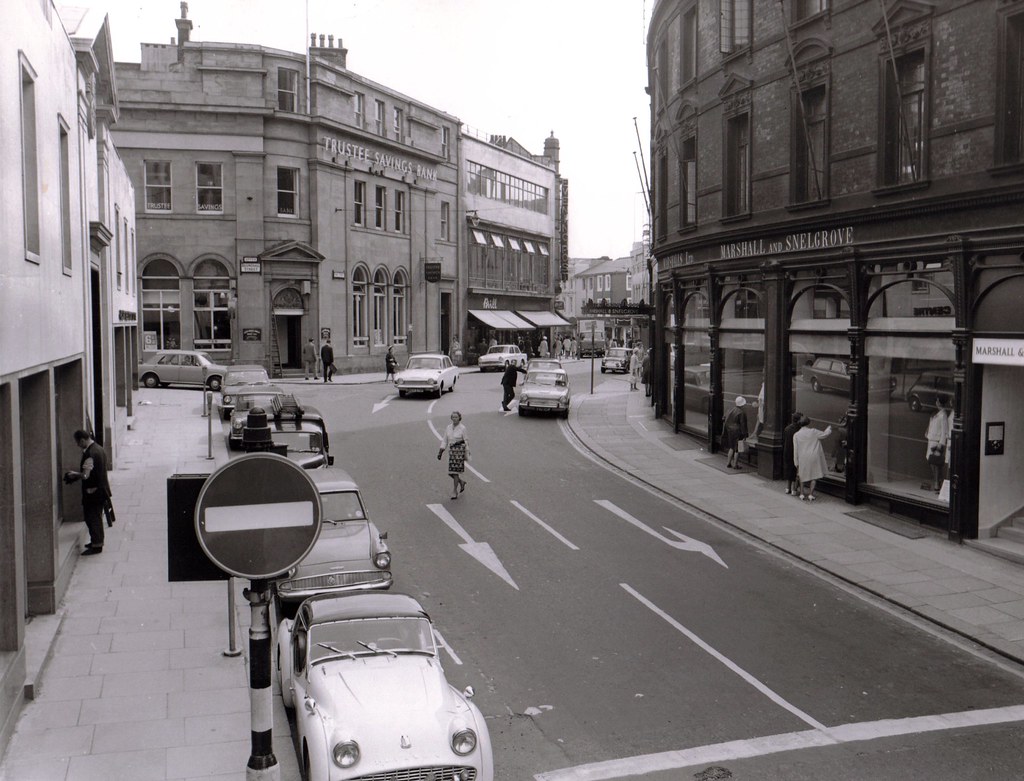