One of our lovely members of Caring Together kindly gave me a collection of London theatre programmes, previously and proudly owned by a relative. The folder given to me, labelled simply ‘Peggy’s Programmes’ – is a joy! What I have never been able to understand is why so many theatrical and event programmes do not state the year? Thank goodness for the internet! The earliest one is from 1933 and is ‘Ten Minute Alibi’ which  opened at the Phoenix Theatre, London and although the names of its Cast are unknown to myself, the programme is a delight with its advertisements alone. Gorringes of Buckingham Palace Road have a full page showing two sketches of their latest inexpensive afternoon frocks. Such elegance at 5 guineas for velvet or the cheaper one in a plain artificial silk, by the name of ‘Cheddar’. I can only think the name refers to the place rather than the cheese. The programme features several adverts for cruises, from afternoon sailings along the Thames to the Royal Docks, or Ocean-going Liners promising elegant living, “faultless cuisine and the intelligent co-operation of expert staff”. One advert urges readers to “visit Denmark for a better holiday”, via the Harwich to Esbjerg route. The same route I sailed on a round-trip with DFDS – at a cost considerably higher in 1982 than the 10 days offered for nine pounds and ten shillings in 1931!

The next programme is for ‘Viceroy Sarah’. It’s leading actress was Irene Vanbrugh and again the name doesn’t ring any bells but the Play, also ran at the Phoenix from 1935. The list of credits alone  conjures up elegance and style. Miss Baxter’s clothes by Fortnum & Mason; Stockings by Kayser-Bondor. Gorringes gave sketches of two wool Swagger Coats, one by the name of ‘Rusthall’  which I could happily wear myself now, especially at their price of 69/6d.! Page after page displayed adverts for chocolates, cigarettes and every possible drink of the day. Marshall & Snelgrove of Oxford Street stated their January Sale to be “now proceeding in all departments”. I like that! It does sound far more genteel than “Sale Now On” as in today’s retail world.

A 1937 programme of ‘George and Margaret’ at Wyndhams Theatre lists a Cast of eight, the role of The New Maid – and the only name known to me – being played by Irene Handl. Standing outside the Queen’s Hotel in the 1960s awaiting some pop idols of the day, the actress exited the front doors carrying her tiny dog in her arms. We all received an unexpected addition to our autograph books that day. Another London production was advertised in this programme, that of ‘Mourning Becomes Electra’ at the New Theatre. The Morning Post reported it being a “theatrical event of the first magnitude – for four hours and a half it held its audience spellbound” If I had been present, I would have been asleep!

‘Arsenic And Old Lace’ at the Strand Theatre in 1945 offered a simple 3-fold programme with a footnote apology, “Owing to the paper restrictions order, we are compelled to suspend our usual magazine features”.    Inside, reads “In the interests of Public Health this Theatre is disinfected throughout with Jeyes fluid.” Loving that smell, I wouldn’t have objected to that!. The most interesting read from the leaflet stated, “You will be notified from the stage if an air raid warning has been sounded during the performance. If you wish to leave for home or an official Air Raid Shelter, you are at liberty to do so. All we ask is that – if you feel you must go – you will depart quietly and without excitement”.

Amongst the theatre programmes were a few souvenir programmes from London events, one in particular catching my eye. It was Trooping The Colour held in June 1949, giving details of the Royal Procession headed by H.M. The King followed by Princess Elizabeth. I am honoured to have this in my possession.

Next time: Programmes from the early Musicals! 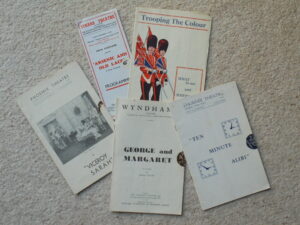