“On May 8 1945, the people of Leeds took to the streets to celebrate VE Day after schools closed and workers were given a holiday. Street parties were held and five days later, on May 13, more than 2,000 people took part in a victory parade in Leeds city centre as normality began to return. 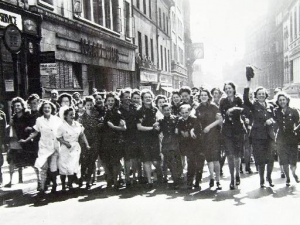 Revelers on Albion Street in Leeds on VE Day. Copyright: other

Burton’s made more than 13 million garments – a quarter of all uniforms used by the army, navy and air force during the conflict.

A total of 100,000 men and 10,000 women from Leeds registered for military service during the war” www.yorkshireshireeveningpost.co.uk

The Royal British Legion invites you to join them today, 8th May, from home, as they, and the public pay tribute to the service and sacrifice of the entire Second World War generation, from British, Commonwealth and Allied Forces to evacuees and those who served on the home front.

“As we face some of the most challenging times since the end of the Second World War, now more than ever it is important to unite in recognition of service to the nation, just as communities did 75 years ago.

There are many parallels between the struggles of the Second World War and what we are going through today. We look to our Second World War generation to learn from their experiences, and we continue our work to protect them from the threat we currently face.

With members of the public unable to attend VE Day 75 events, The Royal British Legion is playing a central role in the delivery of a range of remote activity, including:

At 11am, we’re encouraging people across all generations and communities to take part in a national moment of Remembrance and pause for a Two Minute Silence to honour the service and sacrifice of the Second World War generation and reflect on the devastating impact Covid-19 has had on so many lives across the world.

There is no right or wrong way to take part in the Silence, some may wish to stand at their windows, step outside their homes while remaining distanced from others, watch the broadcast on television, or simply sit in a quiet moment of reflection”