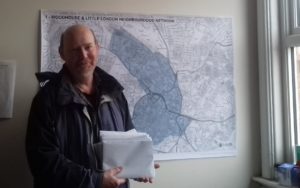 We have had an army of helpers hand delivering newsletters around Woodhouse & Little London this week. Calling in to our ‘sorting office’ to collect a bundle of envelopes to post through letterboxes in their ‘patch’.

Most of these helpers probably don’t think they are doing very much – just a few newsletters but it adds up to around 250 out of 350 or so newsletters that we don’t have to put in the post.  That saves more than £150 and it’s 4 times a year. A huge financial help to a small charity.