A short clip of the Beige performance at the White Rose Centre featuring some Caring Together members, who will also be performing at the Ageless Festival at Yorkshire Dance tomorrow 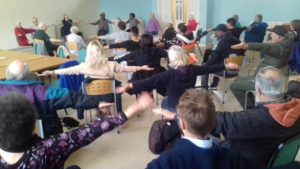 There were 27 people exercising at the Tuesday Group this week. Our regular group were joined by Bus Drivers and other staff, from many areas of England and the Channel Islands, employed by HCT (Hackney Community Transport – which shows their origins). HCT are a Social Enterprise in the transport industry, delivering services in West and South Yorkshire, London, Manchester, Bristol, Jersey and Guernsey. We regularly use the Leeds based services for our groups that are based at Leeds Alternative Travel. The reason for the visit was for them to view services and activities that take place as apposed to just dropping people off. It was great from our perspective to show them what we do and to learn more about their organisation.

Huge thanks to our members for welcoming visitors to their group, the caring together team, and of course Julie (exercise trainer) for keeping everyone motivated. 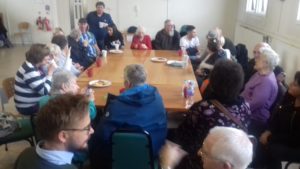 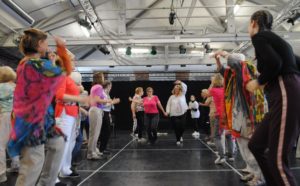 Thanks to a wonderful partnership with Dance On and Yorkshire Dance, members of Caring Together will be performing in the Ageless Festival this weekend at Yorkshire Playhouse. We do wish them well. They have definitely worked hard in rehearsals. And if the flash-mob at the White Rose is anything to go by, it will be lively and colourful.

Staff, Volunteers, Members and Supporters of Caring Together are continuously breaking down stereotypes of ageing and this playful look at stereotypical views of ageing is another example. Do get in touch if you would like to know any more of what we do at Caring Together and how you too can get involved. Or call us if you have other ideas of how we can create new, fun and interesting opportunities and activities together. 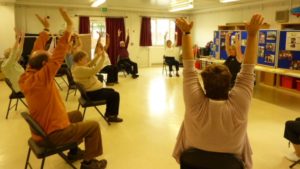 Our Chair Based Yoga sessions have begun. We are in a different venue this time round. It is peaceful and welcoming. Our mind and body movements, strength  based exercises and mindful breathing left us feeling truly relaxed. We hope you can join us again this week. We have 5 more sessions to go.
Lisa will be about from 10.30am to let anyone in near the front entrance. It starts at 10.45am each week. Please call to find out more.
The next one this week is:
Thursday 24th October 2019
going through to, and including:
Thursday 21st October 2019 – 10.45am to 11.45am.
Lisa has added a link below about a recent blog she found on Age UK website’s with regards to Chair Based Yoga, on which they state ‘offers the same benefits as you would from mat yoga’ and one from the NHS – ‘A Guide to Yoga’
https://www.ageuk.org.uk/discover/2019/september/chair-yoga/
and
https://www.nhs.uk/live-well/exercise/guide-to-yoga/ 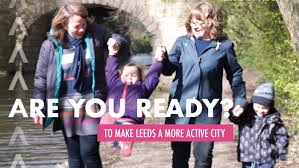 Get Set Leeds! Are you ready to make Leeds more active?

Caring Together joined in the City Wide discussion last week with our members, volunteers and staff members having their say with ‘Get Set Leeds’. Some of the team visited three of our regular Let’s Get Active Approved Exercise groups where our members fed back on what being active means to them, and what helps them get moving, and what would help further.

Accessible and reliable transport came on top for most. And although we don’t have our own vehicle, thanks to secured funding, Caring Together are able to hire a minibus to offer this to our members where needed. This is door to door with support too.

We also talked about moving more and as I am sure most already know that is not always about being at the gym. It’s walking in a park, house work, playing a game with friends, the kids, or grand-children, gardening, or dancing to a song you love. As they noted:

“it’s what you might be doing as part of your day anyway, but by doing it more often or more vigorously you could make a real difference to how well and happy you feel”

Their vision is to “get everybody moving more and for Leeds to be the most active city, we need to think differently and change what we do, together”.

We are delighted to say our members definitely make the most of what is on offer at Caring Together with well attended exercise sessions each week. We also have Yoga, Walking, an Allotment, regular outings and so on. And they also access other activities in and around Leeds too, so to have more would be a delight, as would better transport links so they can get to them.

Thanks to our members for getting involved and having a say. If you wish to add anything further, or find out more yourself then go to getsetleeds.co.uk

Or if you wish to find out more about our activities then please do get in touch.

Many thanks Lisa Argyle One of our members reported the following attempted scam to us.

Last weekend, after experiencing issues with her internet access for some time, she was contacted by phone by an individual claiming to be a representative from her service provider responding to her problem. This did not in itself give any cause for concern as she had made a complaint re her service and was told that someone would call her back.

The individual asked to make remote checks on her computer. He also requested that she give him the rights to navigate her computer. This she did. He also asked her to switch off her mobile phone and tablet and any other devices that she had. She was then informed that her computer had been compromised.

She was asked to go on to her online banking. When this was queried by her the man said that, to ally her fears that the call was not legitimate, he would quote the code that she had on her router. The code that he gave matched the code on her router.

At this point she began to feel nervous and then noticed that all of the cash had been removed from her bank account. She was advised again to not turn on her phone. Panicking, she did turn on her phone and received a message asking whether she consented to the transaction. She mentioned this to the caller who said that she should not have turned on her phone and that the bank message was a scam.

At this point she recalled the session that she had attended on scams awareness arranged by Caring Together. She did not answer yes or no to the bank message instead opting to call the bank. After getting through she was informed that they had not released the funds and the attempted theft had not been successful.

In all, the call lasted for approximately 2.5 hours.

This was an extremely traumatising experience for our member particularly given that the call and its premise had seemed so plausible.

Caring Together contacted  West Yorkshire Trading Standards  and made them aware of the incident.

Caring Together regularly arranges training on scams awareness in conjunction with the SAFER Project within West Yorkshire Trading Standards. We have been doing this for many years. It is incidents like this that show the value of this type of joint work. 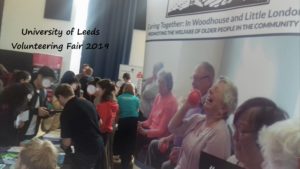 Caring Together, as we do every year, had a presence at the Leeds University Volunteering Fair on Tuesday. As always, it was hectic and vibrant. Lisa attended on behalf of Caring Together. This is a great opportunity to make local students and the university aware of what we do and of the myriad opportunities available.

If you wish to explore the range of ways in which you can volunteer with Caring Together phone Lisa on:

and we can make you aware of what we do and of the ways that you can make a difference to the lives of older people in our area. 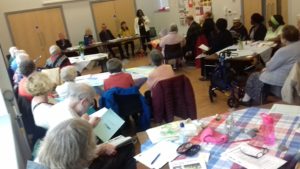 It was Caring Together’s 24th AGM on Friday. It was held at Little London Community Centre. There was plenty of food and refreshments and the Lord Mayor,  Cllr Eileen Taylor, attended and gave a speech. It was a day of positives with the finances for last year looking good and with a great deal of new projects to look back on and with new initiatives in the pipeline. Many thanks to all of the volunteers who helped out on the day. 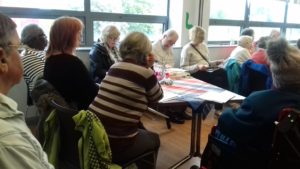 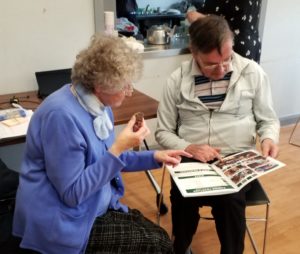 A fantastic day out was had by Caring Together members this afternoon. To celebrate International Day of Older People a group of us went into town, to The Light, to watch the movie Downton Abbey. Afterwards we all went for a drink and a cake.

It was a great way to spend the afternoon. One member said:

‘I really enjoyed the day. It has been years since I went to the cinema.’ ‘I have seen another couple of films that I would like to see. I shall come back again with my daughter’

Many thanks for the IDOP grant, administered by Leeds Older Peoples Forum, that paid for the transport and volunteer expenses for this outing. 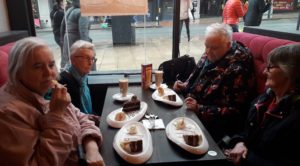 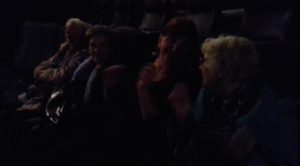 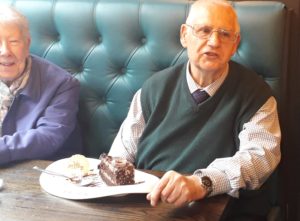 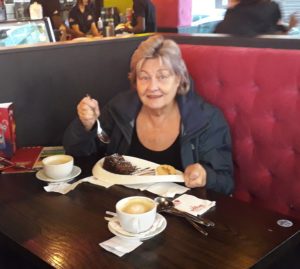