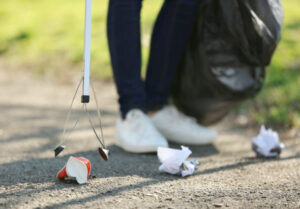 Thanks to support from Leeds Bereavement Forum and Carers Leeds, Caring Together will be hosting a ‘New Monthly Bereavement Support Group’ at our new Caring Together premises. Come and meet other bereaved people for group support and understanding. A warm welcome, cuppa and biscuits will also be on offer too.

Thereafter it will then be on the 1st Monday of the month. So for October the date will be: Monday 4th October 2021 at 11am – 12noon

If you are interested, or just want to know more the please do get in touch. Call Lisa 07436 530073, or email if  you wish: lisa@caringtogether.org.uk 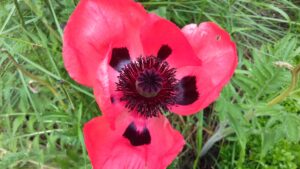 We wanted to give a shout out to our volunteers Myrna and Mary. Some of our chairs got a lovely deep clean a few weeks ago. They have come up like new and are already in use. I know all our bottoms will appreciate it.
Our humble thanks to you both for a fantastic job. I know it was not easy as they were pretty grubby. Thank you. 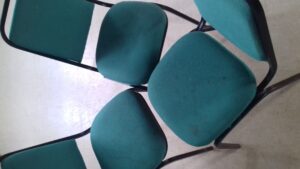 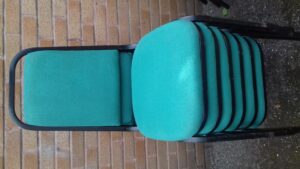 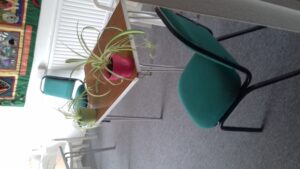 Dear all
We have once again enjoyed our stroll on Woodhouse Moor with a pit stop at the Caring Together Allotment. There were onions, courgettes, broad beans (scarlet emperor), potatoes, herbs and so much more including the beautiful flowers to keep the bees (of all varieties) well catered for.
.
Thank you once again Ben for hosting us and letting us get to take away some of the produce. And for passing on your knowledge not only about the allotment produce but also some cooking tips too. Including the many bees who frequent the plants.
.
If you wish to join us for more outings/strolls do get in touch, or you would like to get involved and learn more about the allotment. Lisa 07436 530073 or email: lisa@caringtogether.org.uk 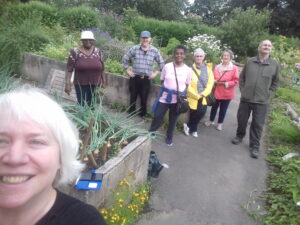 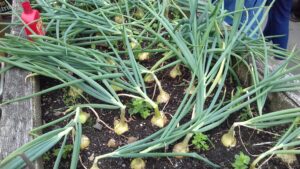 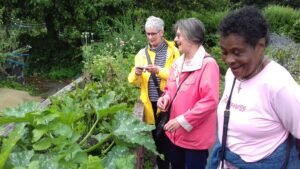 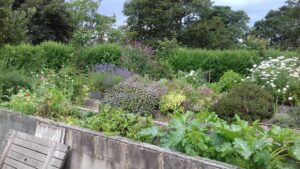 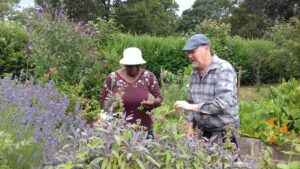 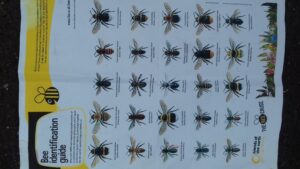 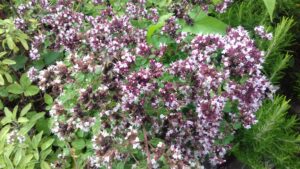 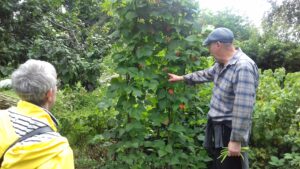 A few weeks ago we were delighted that Mary and Myrna had some time to tackle the store room. It certainly needed it. Last week Susan joined them both on day 2 to sort out some craft boxes. When we moved we didn’t get a chance to sort through everything so we are thrilled they could help. We, meaning all our members, volunteers and the team now know where everything is and even have everything labelled up. Order has now been restored…..THANK YOU 🙂
Kindest regards Lisa 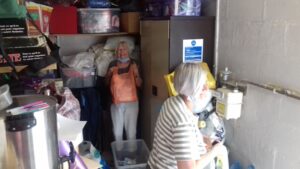 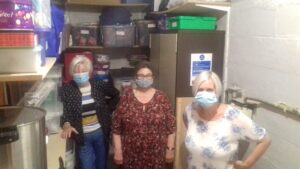 Weddings aren’t what they used to be, which is a relief for people who don’t like sexism, crude humour, drunkenness, ill-fitting outfits, unimaginative food or seething family tensions.

None of which were even hinted at the wedding of my grandson Sam and my new relative Mrs Becky Cross, mainly, I think, because all the youngish people I know (especially Sam and Becky) are more sensible than I ever was, not to mention more thoughtful, intelligent, enterprising and – which, I realised at the wedding, is the most important social virtue – much kinder too.

So, in keeping with  the kindly mood established by the happy couple (‘happy’ being, so far as I could see, an accurate description rather than a wedding cliché), everybody was nice to each other, enjoying the company of, in many cases, strangers and delighted by the just-in-time end of the Covid lockdown.

Which could sound dull but really isn’t, particularly when you consider that the alternative might be a wedding in Walford, Emmerdale or Kabul during the massacre season.

This ceremony was in rolling green countryside near York in a set of old and very attractive agricultural buildings repurposed to look completely unlike the cramped and charmless register office where I was married in the 1970s and which, as I remember, mainly overlooked the council’s rates department.

Since then, and excluding pandemics and climate change, much has changed for the better. English wedding-goers have started to understand the concepts of smart-casual clothing, ecologically-aware confetti-throwing and acceptable hair arrangements (as a reminder of how bad things were, you could look at wedding pictures from the 1970s and 80s, after first reading a trauma warning).

Other things didn’t need to change; bridesmaids in uniforms  so glamorous that you could imagine them breaking into a West End dance routine, a bride wearing a lovely white dress with  a lacy train which was so definitively a wedding dress that it couldn’t be repurposed into anything else and its future is secure.

There was even a wedding cake tiered, though not in the usual way, by Sam, who, unlike most men in the last century, knows how to bake very well.

But I think the most impressive improvement was in the quality of the wedding speeches. These have been, in my experience, minor ordeals to be got through with the aid of stiff drinks. Here, everybody, especially Sam and Becky, said what they had to say very wittily and intelligently and without recourse to boorishness, cheap cracks or showing-off.

Taking the long view, which, at my age, isn’t quite as long as it used to be, I can see, based on the wedding speeches alone, a union of two families who, being blessed with rare intelligence and goodwill will continue to enrich each other’s lives, just like the Montagues and Capulets didn’t. 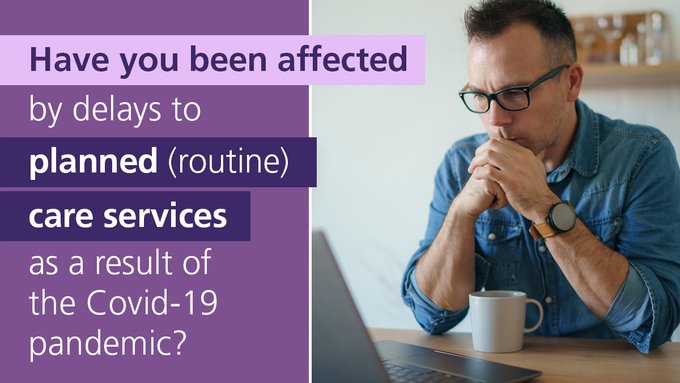 Planned care is also known as ‘routine’ or ‘elective’ care. It is treatment that people decide to have to help manage a health problem, rather than emergency treatment.

As we cautiously progress with the move out of lockdown, planned care services that were temporarily stopped are gradually being brought back in the safest possible way for patients and staff.  The Planned Care Alliance is finalising a strategy for how to work together as a healthcare system to address the increased waiting list.

As part of this West Yorkshire & Harrogate Health Care Partnership would like people who have been affected by delays to planned care to join a new Planned Care Citizen’s panel.  This virtual Panel will be in place for twelve weeks from 21 June to 10 September 2021. They are looking for panel members who are currently waiting for a planned care procedure, or who have a close connection with an adult or child affected by the delays to planned care services as a result of the Covid-19 pandemic.e

The hope for the panel is that it will represent people from across West Yorkshire and Harrogate, of all age groups, ethnicities, genders and with experience of different health conditions.

More information and details of how to express interest in joining the panel can be found at https://www.wyhpartnership.co.uk/our-priorities/improving-planned-care/planned-care-citizens-panel.  The deadline to apply is 13th June.

Dear all,
Councillor Abigail Marshall Katung wanted me to share this message in relation to ‘Volunteers Week’.

Message to our volunteers from:

Councillor Abigail Marshall Katung,  Cllr Kayleigh Brooks & Cllr Javaid Akhtar
“Just to say a huge thank you to all of you and all the wonderful volunteers we have serving throughout each year and especially in the last very difficult year. We truly appreciate you all and looking forward to when things are normal we can all meet again properly and celebrate being alive and to say thank you to you all” 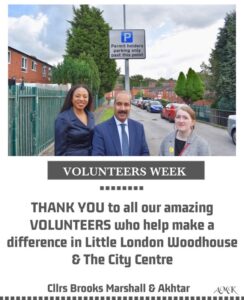 We are delighted to have the spotlight on our volunteers this week (although for us it is all year round), for volunteers week. And this includes those who usually volunteer but were not able to due to Coronavirus. From all at Caring Together we are sending a heartfelt thanks to you all for being a valued part of our organisation and the community. We salute you all and hope you enjoyed your chocolate treat with your thank you card :). We look forward to celebrating together again soon. 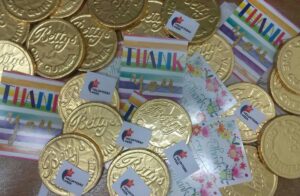 Our new space has had a splash of colour added. Myrna altered the batak, made by members, so we can eventually get it up on the wall. She also brought in some brightly coloured plant pots. It is lovely to see it slowly but surely coming to life.
We have also been donated some second hand books, CD’s, DVD’s and Hello magazines too. if you would like some call 07436 530073 or email: lisa@caringtogether.org.uk 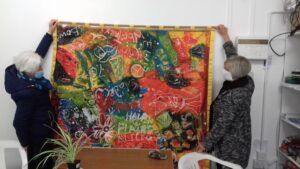 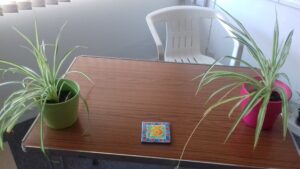 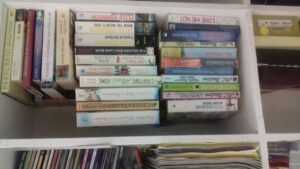