Caring Together is sending you all some festive wishes.

Please click on the link below for some festive cheer – you may need to click on the video for the sound as well. All the best to you all. Keep safe. 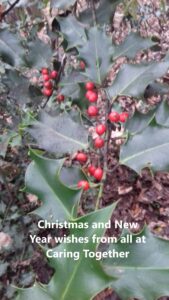 In these uncertain times, WEA staff will be providing FREE online activities on Christmas Day for everyone. Our short activities will run throughout the day and will provide fun and a chance to chat. So whether you are feeling lonely, or are just needing a moment away from the busy family, the WEA will be here for you this Christmas.

Activities will take place on Zoom, meaning you can engage in a safe space with friendly faces from the comfort of your own home.

Click on the button at any point during Christmas Day to join:
09:00-10:00 – Christmas (virtual) Walk in Dorset/Sussex

20:30-21:30 – Christmas songs sing-a-long and guess– join in to some of your favourite Christmas tunes
Join us any time on Christmas Day

Click on the below link for more information and the link to log on via zoom on Christmas day. The Chemic Singers invite everyone to a sing song on Christmas Eve at 7:30pm On Zoom and streamed on to the Facebook.

Caring Together staff are: 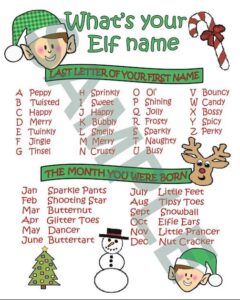 Watch the National Theatre’s production of Dick Whittington, a hilarious and heartfelt new version of the classic tale that’s packed with the cheekiest of jokes, the chattiest of animals, the awesomest of songs and the messiest of silliness. The pantomime has been freshly updated by Jude Christian and Cariad Lloyd for 2020.

Celebrate the joy and laughter that panto brings to thousands of families across the UK every year with the National Theatre and The Show Must Go On in our Great British Panto Party.

You can also get involved with the fun, with craft activities for the family using the National Theatre’s Panto Party Pack: https://www.nationaltheatre.org.uk/sites/default/files/dick-whittington-panto-pack-v2.pdf

The Caring Together offices are now closed for the holiday season, returning on the 4th January 2021. We will be turning our phones on periodically to check for anything urgent and calling into the office, and making some necessary visits and calls. See also the useful list of contacts from the insert in our newsletter and detailed below. Festive and New Year’s wishes from us all!

THINGS would be worse if it wasn’t for the BBC’s health correspondent, who always signs off his pieces with a jaunty little rhyme: ‘Dominic Hughes – BBC News.’

It’s a pity he did not have a much earlier life as a foreign correspondent, in which case he could have signed off with ‘well, that’s all from me, Dominic Hughes – Moscow’ or ‘That’s all from me – Abyssinia.’ (Which might become mildly amusing if you say it aloud at least three times; if that doesn’t work try it on a very old person, who might just remember it from the days before they invented clever jokes

And yes I know that Abyssinia is now used only to describe an area of Ethiopia (because I’ve looked it up on Google) and that I’ve just sinned by recycling a terrible ancient joke, but these are hard times. We have to accept recycled bad jokes because, for now, there’s not much else in the television store cupboard.

Besides, old jokes aren’t always unfunny, just nearly always. Dad’s Army, Fawlty Towers, Morecambe and Wise or Tommy Cooper (most of the time) still work; I think this is more than can be said of On The Buses or the Carry On films.

It’s not the sexism or racism that bothers me, it’s the feeling that I’m being bashed in the ribs by somebody who won’t leave me alone until I laugh so much I need medical help. This is why I tire of Sid James or Reg Varney quite quickly but still laugh at Basil Fawlty and Captain Mainwaring, whose winning and enduring quality is that they have no sense of humour whatever.

I’m also resistant to Michael McIntire. I have to admire him on the grounds that he is (says Google) ‘the highest grossing stand-up comedian in the world’; it’s just that, were he sit next to me on a train and start to shower me with amusing anecdotes, I would feel the need to pull the communication cord, assuming that, in the wake of the pandemic,  there are still such things as communication cords, and, come to that, trains.

Perhaps the secret is to make people laugh without looking like you want them to laugh, a trick which 12-year-old boys can’t usually manage but should be within the range of most grown-ups (excluding The Krankies, who are obviously a special case).

I learned this week that Humphrey Lyttleton, who hosted the BBC Radio 4 show ‘I’m Sorry I Haven’t a Clue’ from 1972 to  2007, didn’t initially think the programme, which has just been voted best radio comedy of all time, was very funny at all. He was so disgruntled with it that he wanted it to be taken off the air and only enjoyed the bits where he made rude comments about the audience and his fellow performers.

I suppose he mellowed over his 35-year stint on the show, but he still maintained an air of contempt for whole enterprise and never gave any sign of being amused. That’s exactly why the listeners loved it.

And now it’s my duty to wish you all a merry Christmas within limits. If possible. And a joyous new year.

And to you too Oliver from us all at Caring Together, until next time….

Or my wife will toss me out
With the Christmas tree

Notes: I have no wife, and I have no tree, I may have some rum, but shhhhhh