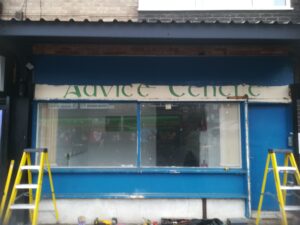 Caring Together will be moving into our new base in Charing Cross at some point early in the New Year. I popped down there yesterday as the shutters were being replaced. Removal of the old ones exposed part of the old Advice Centre sign from back in the 1980s/90s. It was being covered up by the new shutters so I thought that I would get a picture while it was still visible. Does anyone know when it first opened and when it closed? I know that Caring Together had a presence there early on in its existence. Hopefully it is a good omen and that we are returning home.