Remember, remember the 5th November – well,  we’ll certainly remember this one! Going into Lockdown 2, Bonfire Night will be vastly different from those we’ve known before. I don’t recall celebrating ‘Halloween’ as a child, probably because we didn’t.

Preparations for Bonfire Night started, however,  I suppose from early October. Any old furniture destined ‘for the bin’ would be saved then the chumping would start. Planks of wood and broken tree branches would be dragged along the streets to join anything which would burn. Alongside, we would be buying fireworks, usually two or three at a time and storing them in a biscuit or ‘Quality Street’ tin.

The local shop ‘Collinson’s’ sold Standard Fireworks but some shops sold the ‘Lion’ brand; always being displayed in a large tray with glass lid. As the day drew nearer, checking of the tin to see what was still needed was a regular occurrence. Should I buy a ‘Mount Vesuvius’ with its changing colours or yet another brilliant white ‘Snow Storm’? One or two rockets were bought too and we always had to ensure an empty milk bottle was to hand for its launching pad. Looking back, the rockets were very feeble by today’s standards but at least they were silent, bar the initial ‘whoosh’. Often we didn’t even see them explode as they disappeared behind a house. I suppose there was always a ‘Guy’ on display, accompanied by a request for “penny for the Guy please”, although it would have only been sitting near to our houses, never outside shops. ‘Raiding” occurred and kids from the ‘Beechwoods’ or ‘Norwoods’ in Burley/Headingley would descend and run away with whatever they could get their hands on. We would be devastated, so much so we took it in turns to do ‘guard duty’. Had they had arrived on my watch though, I would have been terrified and would have had to have let them take what they wanted!

The 4th November was ‘Mischief Night’ and harmless pranks were played on our neighbours. We ‘d plan to tie door knobs to the dustbin lids with string and smear doorknobs and garden gates with treacle. In reality I don’t think we did carry out anything as ambitious and probably settled on simpler tricks such as door knocking, making noises and running away. My Mum certainly said “You’re not taking our Golden Syrup!” not to mention a prior reprimand about leaving some “poor soul” having to clean up the mess.

‘Bonfire Night’ was such an occasion though, and in my case, the fire was built and lit on nearby waste ground, known as The Woodyard. An event when parents met up to chat and offer round parkin, toffee apples and bonfire toffee which would often result in a dental appointment soon afterwards. There may have been pie and peas but if so, I would have been warned by Mum beforehand not to eat them, their origin unknown and Mum only trusting those made by ‘Newtons’ on Kirkstall Road!  Potatoes were roasted at the edge of the fire and sometimes forgotten about so we would see their charred remains the following day when we children would look for any unused fireworks. On the walk to school we would see rockets in the gutter and could only guess how far they must have travelled – not far I’ll wager. Of course Bonfires were enjoyed not just on waste land but at the end of many a street, being cobbled in those days.

One of my earliest bonfire recollections was when I would be around six years of age. Keith who lived next door but one, and in the same school class, experienced the horror of a ‘Jumping Jack’ cracker landing in his wellington boot! Keith was rushed to Casualty – probably the Public Dispensary on North Street where he was cared for. I clearly remember Keith wearing those slippers which reached the ankle and seeing the heavily bandaged leg above when I visited him at home.  Curiosity from myself, coupled with his bravado, he showed me the terrible burns which have left me frightened to this day of certain fireworks. A lesson learnt.

When I moved to my apartment close to Woodhouse Moor, it was only a short walk to the Council’s Bonfire and Firework Display. Most years I have enjoyed the display from the comfort of home and could even see the top of the fire over the tops of high buildings. A mini Woodhouse ‘Feast’ was also on site for the evening, having disappeared by next morning. This year we will have nothing. but I hope children will be able to enjoy some fireworks (at hugely inflated prices these days!) with  accompanying tasty treats. I’m sure we will still be rocked with loud explosions from somewhere around and see the occasional firework trail but nothing on the scale of yesteryear with the current restrictions. I feel blessed to have the memories of those simple and fun times.

Thank you once again Maureen, until next time… 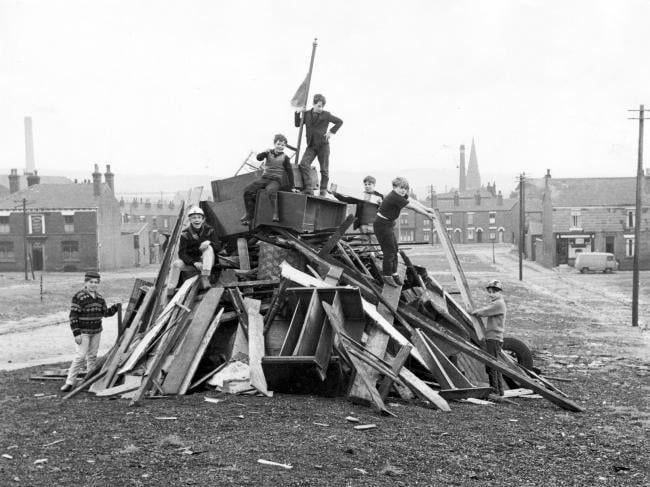