Day 158 – My escapades with air travel didn’t take long so here we are at Trains. Trains were always a fascination of mine from a very early age. Having a family car there was never the need to travel by train, but I was always nattering Mum and Dad to take me for a train ride. Living near the Leeds to Harrogate line, there were trains up and down many times a day. On a morning I would awaken to the sound of shunting at the goods yard, but the real yearning was for passenger trains. At 11.30am each day when playing out in the street or on Burley Park any of my fellow train loving chums and I would run to the wall by the ‘little bridge’. The ‘tooting’ would herald the arrival of the mighty ‘double header’ – two steam engines pulling the maroon liveried coaches on its daily journey to Newcastle. We would wave to the engine drivers and behind them, the passengers sitting at their tables on the ‘big train’. If out for a run  in the car east of Leeds,  we would stop at Church Fenton and watch the trains from the bridge above but Harrogate was just the best as one could go onto the platforms and if lucky would see the ‘Pullman’ parked up. To this day I’ve never experienced Pullman travel but I loved the brown and cream carriages with their curtains tied back, the tables laid with crisp white damask cloths and the table lamps with decorative shades. In those days – the 1950s – there were three classes of travel – apart from the Pullman; first class – No!, 2nd – where Dad and I would travel, and even 3rd class!

At the time Leeds had another Station besides the ‘City’ – that of the ‘Central’ on Wellington Street. The City Station was always my favourite though with its large concourse and booking hall, thankfully saved from being used an indoor car park and restored to its former glory. Where now stand the variety of eateries, then were small doorways where one would enter the particular platform needed. There were machines for platform tickets, I think it was only an old penny or maybe 2d to purchase a ticket. Also one of those machines with which to print a metal strip with your name on – or whatever one required. A red machine if I remember correctly with a sort of clockface dial but with the alphabet. One turned the handle round and then activated the machine to print.  Trainspotters would buy a platform ticket, armed with their pencils and notepads and if lucky a camera, together with meals of the day as the ticket covered all day. Mainly though the ticket would enable one to bid farewell to someone taking a journey. I can remember both a joyous and sad occasion when platform tickets were purchased for a send off, even boarding until the announcement came that the train was about to depart.

I boarded a Glasgow train with Mum & Dad to send off my Sister and her family who were bound for a cruise. An educational cruise on an ex-troop ship, the “Dunera” sailing to the Med. from Greenock, the Port of Glasgow. Only a handful of general passengers taking the cruise besides the schoolchildren, the youngest passenger being my eighteen  month old nephew.The crew eventually found a small enough lifejacket for John and spoiled him rotten! The sad occasion was in 1966 when I was leaving for  Norway to stay with a family of Norwegian friends. Mum and Dad bought their platform tickets to bid me “Bon Voyage” on the Boat Train to Newcastle and I sat in the compartment with a couple from Ormskirk, a place I hadn’t heard of at the time but always connected with the couple when mentioned since. I say sad as Dad was dying from bowel cancer, there being no treatment then and as the train slowly pulled away we waved to each other, I was feeling upset but Dad was crying as he felt he wouldn’t see me again. He passed away shortly after I returned home.

BUT – back to trains and Boat Trains, yes they were something special in days gone by. My train to Newcastle went directly to the Tyne Commission Quay from where the ‘Fred Olsen’ ships sailed to Oslo but my travelling companions were heading for Bergen with a crossing on Bergen Line’s “Venus”.  Nowadays there are no Boat Trains; if sailing from Newcastle or Hull it is a standard train with a connection to the Docks by double decker bus. As a child though listening to my Grandma speaking of her family travelling overseas from Hampshire and Surrey, their journeys always started with a Boat Train to Southampton or Tilbury Docks.

Prior to Dr Beeching closing hundreds of stations throughout the Country, so many places could be reached by steam train and I suppose the early days of ‘diesel’.  Arthington, Otley, Wetherby…. but also Kirkstall. Visiting my paternal Grandma for Sunday lunch, we would catch a bus to town, take the train to Kirkstall and walk the short distance to Broadlea Crescent, returning on the 77 bus back to Burley. It all seemed so simple then – well it was. Public transport by Leeds City Transport, Sammy Ledgards Et al, with conductors to assist and calm any nonsense on board and trains run by ‘British Rail’ with their Guards and Controller lookalikes! The good old days of steam, diesels, reliable times and straightforward ticketing – ‘British Rail’!

Thank you Maureen for sharing your heartfelt personal moments, until next time… 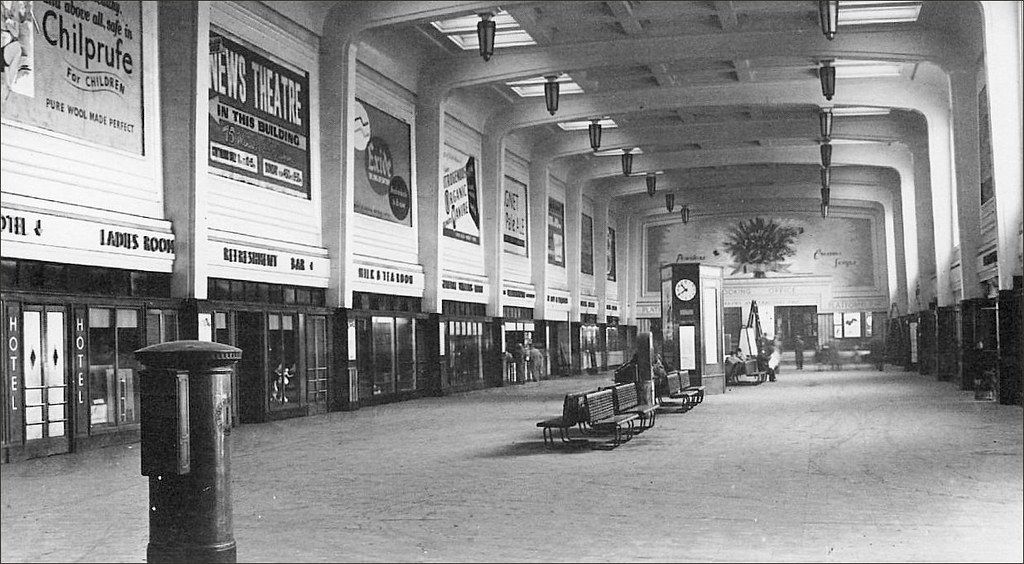