It was obvious from Peggy’s programme collection how much she loved the Musicals and those performances must have been wonderful to watch. The first one dates back to 1934 with ‘Mr Whittington’ at the London Hippodrome. In the title role was Jack Buchanan who also staged the entire production which had a cast of 66 on stage! His leading lady was Elsie Randolph and Fred Emney no doubt gave one of his excellent character performances. From the programme photos, one can only imagine the glamour and sophistication reaching out to the audience. I don’t recognise any of the musical numbers – by name – but will certainly be looking them up via Google and YouTube. To watch the Show from the Royal Box would have cost £6.6.4d with the cheapest seat at 2/6d. Full page adverts for Rolls Royce, Bentley and Daimler cars, are next to restaurants with late night dancing, expensive Furriers and the jewels of Cartier.

‘The Blackbirds of 1934’ presented at the Coliseum was described as ‘the fastest and most modern Revue ever presented in London’ and featured the Blackbird Beauty Chorus & Choir, the World’s greatest female tap dancer and Peg Leg Bates!

Another Revue, this time at the Palladium in 1936 was ‘O-Kay For Sound’ starring Flanagan & Allen, Naughton & Gold, and Nervo & Knox. Another huge cast by today’s standards and from the souvenir brochure I lost count at 53! Sixteen of the 24 Sherman Fisher’s Palladium Girls lined up in their immaculate costumes and white tap shoes, tied with large bows. A note on the front page caught my eye: ‘This Theatre is scientifically cooled by the ‘Ozonair’ system of ventilation, as well as by the sliding roof’’ Today’s programmes do not have such interesting notes!

The following year the Palladium hosted ‘London Rhapsody’ described as a Symphony of a great City, basically a Revue of London but from the scenes and musical numbers, it must have been a joy to watch. The brochure shows Scene 6, Lyric Theatre 1899 listing its own costume and decor credits for “Tell Me Pretty Maiden”. This song I do recall, having heard many times over the years by members of the Players Theatre in “The Good Old Days” at our beautiful City Varieties. How I would love to have seen Harry Dennis’s Dancing Dudes, I can only imagine how slick their routines were. A brochure page advertises ‘French Fern’ by Morny, alongside of which is a note “The London Palladium is perfumed each performance with this delightful perfume – reminiscent of the moors in Autumn” Certainly a change from Jeyes fluid! The cover of the brochure is taken from a painting by Dame Laura Knight and shows an elegant lady attired in evening dress watching the action onstage from the Royal Box. A truly delightful picture.

I could continue but space will not allow – for now……..

Wonderful Maureen, thank you so much once again, until next time…. 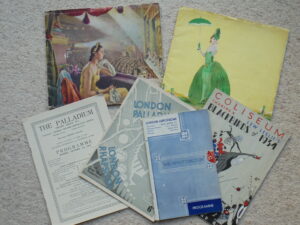