My father’s sister, Peggy got an infection in her neck glands so bad she had to have major surgery which left her jaw and throat disfigured and mangled from the age of ten. Protected by her doting mother, she got used to life in the shadows.
.
My birth in 1937 was followed within three years by the arrival of two brothers who kept my mother very busy. Peggy, aged about twenty by then, helped out and doted on me. By 1940,my grandmother had been asked to offer lodgings to ENSA  actors and singers who came to entertain the troops and factory workers at the Grand Theatre in Wolverhampton.
.
A Godsend for Peggy, now about 20.  She had been taken from school at the age of ten, and suddenly her home was a backdrop for lots of attention from some seriously glamorous gentlemen – including Russell Thorndyke and Peter Cushing – skilled at charming audiences. They were immensely kind to this starstruck girl. She treasured their signed photographs, fell in love countless times.
.
My grandmother, an obsessive housewife,was very proud that she had never read a book or wasted good cleaning time in a theatre in her life. But an auntie in Ealing loved to treat Peggy to the best seats in both the Wolverhampton and the London theatres so Peggy could imagine herself into the silken robes and feathery hats of leading ladies like Googie Withers or Patricia  Roc.  So she collected all her programmes, undated of course because big productions never have the year  included in adverts. It’s totally obvious at the time, and a perfect nuisance now.
.
Hearing Maureen talk of her dedication to the City Varieties, I thought she might appreciate these relics of some very hard times when  the importance of creativity was recognised by a government who even requisitioned lodgings for travelling artists, who had the capacity to inspire a girl who would otherwise have learned nothing except the art of floor scrubbing.
.
Antiques RoadShow has surely taught us of the importance of funny little relics like these which embroider our national life.
.
Over to you, Maureen, and more power to your elbow as you lobby this government to acknowledge the power of art in these desperate times.
.
Pat T
.

Thank you so much Pat, I took a look at the programmes myself and will be handing  them over to Maureen soon, what a treat indeed. Until next time…

See attached pictures, one of Pat handing over the programmes and a few pics of just some of them. 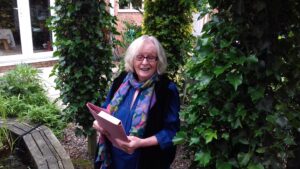 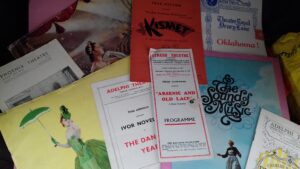 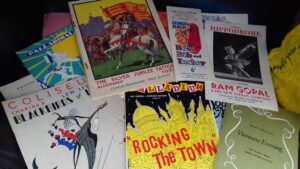