Join in this singalong from your home. Leeds City Museum monthly choir has gone virtual

Warm up exercises and songs to promote wellbeing and a chance to reconnect with people.

Please email city.museum@leeds.gov.uk (or private message us on Facebook) to register your interest in joining and we’ll send you details of how to connect on a phone, tablet or computer.

Free event, open to all abilities.

Leeds Carriageworks is one of 10 venues presenting a series of #YourPlaceComedy live streamed shows with The Chase star Paul Sinha and Radio4 & Mock The Week regular Angela Barnes – live from their living rooms.

The event is FREE to watch, there will be an option to donate to the ten small, independent venues if you wish.

Find out more and watch the show at  https://www.yourplacecomedy.co.uk/

Caring Together will be closed on Monday 31st August and Tuesday 1st September.

We will be back on Wednesday 2nd September.

The Best Council Plan 2020-2025 strategies include making Leeds the Best City where people age well, where people are valued, feel respected and appreciated, and are seen as the assets they are. You can read more about it here: https://www.leeds.gov.uk/your-council/plans-and-strategies/council-plans 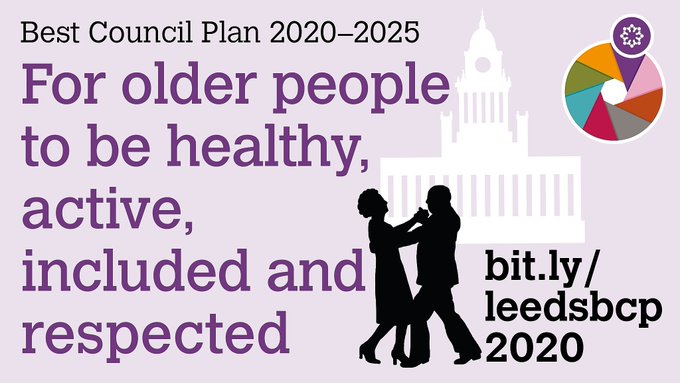 The Best Council Plan is the strategic plan which sets out how the council will deliver better outcomes across Leeds.

Day 116 – I heard on the Radio today that ‘Age UK’ will not be re-opening their Charity Shops which has made me wonder about the future of many other such shops. As I passed the ‘Cancer Research’ shop in town on Friday a large notice in the window appealed for Volunteers for every day of the week. Charity Shops have in the main been run by older and retired staff who could, of course, have been shielding during the Covid Lockdown. In any case they may well have concerns regarding return to the close confines of a shop for several hours. It certainly makes one consider the value of volunteering at the present time. Just prior to Lockdown being in the ‘over 70s’ age group I was prevented from carrying out my front of house role at the City Varieties Music Hall, which upset me greatly. Within days – in fact before the next Show took place – Lockdown happened – so all our Volunteers, irrespective of age, were not required.

My other Volunteering apart from the City Varieties and occasionally at the Leeds Playhouse, is tenant involvement with my Housing Association. That too came to an abrupt halt however we have managed to hold a couple of important meetings via ‘Zoom’ with more planned and this could well be the way in future. It could be a long time before we are able to hold our quarterly meetings for tenants which include a Speaker, Q & A sessions with members of staff, quizzes etc and not forgetting the buffet! These were important social gatherings for, in particular, our older tenants who can feel socially isolated.

All over, there are thousands of volunteers doing excellent work in all manner of organisations, many of whom have been deprived of their time for giving during Lockdown. I do hope that those who keep the Charity Shops ticking over will be able to return? Or will the Charities themselves have faced such economic problems that they may be unable to re-open their shops? Time will tell. I’ve had many an excellent bargain from the shops over the years and I still have a list of things to look out for!

Sadly, frustratingly and worringly so – Theatres are to be amongst the last to re-open their doors. Outdoor performances being allowed now, these are only possible for a minority.  However far away it may be, to throw open the doors once again – and for those venues fortunate to be able to do so,  we volunteers are waiting in the Wings – and await our cue.

Although face to face surgeries have been cancelled, if you need to speak to the MP for Leeds Central, Hilary Benn, you can do so on Friday afternoons by telephone or online

“Although my face-to-face advice surgeries have been suspended I will be conducting online and telephone surgeries for those constituents who need to speak to me directly about their cases. To make an appointment please email hilary.benn.mp@parliament.uk or telephone 0113 244 1097 with your full name, address and telephone number and the word APPOINTMENT as the subject line. A member of my team will get back to you with further details.

Alternatively for Council issues such as housing you may wish to contact your local councillors for assistance. Their contact details can be found online here or at Leeds City Council’s website here https://democracy.leeds.gov.uk/mgFindMember.aspx .”

‘NOW WE ARE SIX’ Written by A.A.Milne

The coronavirus pandemic and related health concerns, physical and social isolation, job losses and a general atmosphere of change and uncertainty are contributing to many people feeling quite anxious.

That’s why the NHS in Leeds is urging people to look after their emotional wellbeing and to seek help if they have concerns about their mental health.

Dr Gwyn Elias, GP and Clinical Lead for Mental Health for NHS Leeds Clinical Commissioning Group said “While on the surface, life is starting to look more normal, these are still very strange times and that’s bound to have an impact on how we’re feeling.

“It’s really important to acknowledge that; to pay attention to our feelings and to look after our emotional and mental wellbeing, just as we look after our physical health.

“There are many resources to support mental health and wellbeing for everyone on the NHS Choices website (https://www.nhs.uk/conditions/stress-anxiety-depression)

“In Leeds, we also have a range of support that people can access, including self-help resources, helplines and crisis services. The starting point is the MindWell website, which has a wealth of information and guides, as well as links to key services.

“If you feel you need to speak to someone, we also have a new mental health support line, which provides confidential support, advice, information and guidance for anyone concerned about their mental health available 24 hours a day, 7 days a week.

“The NHS is still here for you and we have lots of different services in the city that can help.”

Anyone registered with a Leeds GP can call the new mental health helpline on 0800 183 0558. The service is open 24 hours a day, 7 days a week and complements mental health services already available in Leeds. These include:

Support for people in crisis is also available:

Anyone whose life is in immediate danger should call 999.

Up to date information about coronavirus

For up to date health information, please visit https://www.nhs.uk/conditions/coronavirus-covid-19/

Dear all,
See below the answers to yesterday’s ‘Monday Mind Workout, themed around the Elements: Earth, Fire, Water and Air.

1. Which is hotter, the centre of the earth or the sun? Centre of the earth
2. Someone who studies earthquakes is called a…. Seismologist
3. In the 1980’s who sang Planet Earth? Duran Duran
4. Do Stalactites ride from the floor or hang from the ceiling in limestone caves? Hang from the ceiling
5. How fast does the earth spin, 100mph or 1000mph? 1000pmh
Fire
1. In which decade was the Great Fire of London? 1660’s
2. Which singer had a ‘Ring Of Fire’? Johnny Cash
3. In which town was Fireman Sam’s fire station? Pontypandy
4. Who is famous for painting Matchstick men? L.S. Lowry
5. In which Dickens novel does Miss Havisham die following a fire? Great Expectations
Water
1. True or false. Sound travels faster through water than air? True
2. What is another name for a tidal wave? Tsunami
3. Which is the longest river on earth? Nile
4. What colour rain did Prince sing about? Purple
5. Nimbus, Cumulus and Stratus are types of what? Clouds
Air
1. Who sang ‘The air that I breathe’? The Hollies
2. How long is a typical blade on a wind turbine, 50ft or 100ft? 100ft
3. Where in America is known as the windy city? Chicago
4. Which slang term for a tornado is also the title of a 1996 film? Twister
5. Which song started ‘Let the wind blow high, Let the wind blow low’? Donald where’s yer troosers

Dear all,
Today’s  ‘Monday Mind Workout’ is themed around the Elements: Earth, Fire, Water and Air. Best of luck.

1. Which is hotter, the centre of the earth or the sun?

2. Someone who studies earth quakes is called a….

4. Do Stalactites ride from the floor or hang from the ceiling in limestone caves?

1. In which decade was the Great Fire of London?

3. In which town was Fireman Sam’s fire station?

4. Who is famous for painting Match stick men?

5. In which Dickens novel does Miss Havisham die following a fire?

1. True or false. Sound travels faster through water than air?

2. What is another name for a tidal wave?

3. Which is the longest river on earth?

4. What colour rain did Prince sing about?

5. Nimbus, Cumulus and Stratus are types of what?

3. Where in America is known as the windy city?