I’VE long been mildly haunted by a story told to me by my friend Keith, who I enjoy talking to because he knows lots of things I don’t know and, in this case, could not possibly have guessed.

Cochran, born in Minnesota, was killed in a car crash near Chippenham, Wiltshire, in 1960, aged 21. He was touring Britain with Gene Vincent (‘Be Bop A Lula’), who was badly injured in the accident, which was the sort of thing to be expected when in-demand performers travelled huge distances in cars without seatbelts or tiny planes, like the one in which the singer Jim Reeves crashed to earth in 1964, instantly upgrading himself from a very fine performer to an irreplaceable country legend.

Eddie Cochran’s death was more of a tragedy than most deaths; he was a precocious talent and we’ll never know what would have happened to him next – a ground-breaking album perhaps, or a paunchy residency in Las Vegas or drugs and decline, although I can’t think that, like his near-contemporary, the original Beatles drummer Pete Best, he would have ever have joined the civil service.

However, and to my shame, I’m more struck by a small incident in the Eddie Cochran story than by wider issues of fame and mortality.  My friend Keith, who reads an awful lot, even for a librarian, told me that one of the first people on the scene of the fatal Cochran crash was a cadet policeman called David Harman.

Harman later changed his name to Dave Dee and, with his friends Dozy, Beaky, Mick and Tich launched a band that might have changed the face of modern pop if they had been a bit more talented.  You might remember some of their hits, like ‘Hold Tight’ and ‘The Legend of Xanadu’, if you also remember the Cuba missile crisis and Z-Cars.

I don’t know why I take such an interest in coincidence; the fact that a random car accident in Wiltshire could involve both a major American rock star and, er, Dave Dee has no deeper meaning than that it’s an interesting coincidence. Chasing its significance any further would lead you into the weird and dangerous land of conspiracy theories, which I’m not prepared to enter because it would mean keeping company with David Icke and the President of the United States.

Thank you once again Oliver, until next time…..

Dear all,
Please find below the answers to this weeks ‘Monday Mind Workout’:

1.Who is Krishna Pandit Bhanji better known as?

Residents are being asked for their views regarding a proposed update of current legislation designed to tackle alcohol-related anti-social behaviour in public space areas and communities across Leeds.

Leeds City Council is reviewing 13 Public Spaces Protection Orders (PSPOs) which were introduced in October 2017. A PSPO can last for up to three years however under the Anti-Social Behaviour, Crime & Policing Act 2014 they can be extended upon review.

All 13 PSPOs have prohibitions which do not allow people to consume alcohol in public places. Two of those PSPOs (Armley and Harehills) also have prohibitions to help tackle issues of household waste containers being left in the street for prolonged periods of time. The council is proposing to keep these PSPOs and prohibitions.

Following a review by the council and partners, it is also proposed that prohibitions be added around ‘temporary structures’ (tents, portable shelters and unauthorised and unlicensed structures) to the city centre PSPO and to support the tackling of anti-social behaviour issues seen at Leeds General Infirmary. Similar prohibitions have also been proposed for St James’s University Hospital as part of the Burmantofts PSPO.

Leeds City Council is proposing to extend all 13 PSPOs (some with new prohibitions).These proposals have received support from local councillors in their respective PSPO areas.

If you would like to comment on these proposals, you can do so from Monday 10 August 2020 until Sunday 06 September 2020, by filling in an online questionnaire at: https://surveys.leeds.gov.uk/s/PSPO-Consultation/

The council will make a final decision on the proposed implementation of PSPOs following the conclusion and evaluation of the public consultation. To view the terms of the PSPOs currently in place, please see: www.leeds.gov.uk/pspo

“Since introducing 13 PSPOs in October 2017, we’ve seen some really positive results in terms of tackling a range of issues that were found to be having a negative impact on the lives of residents and their communities.

“As part of the terms of the legislation we are reviewing each of the PSPOs as they approach their third year in operation to assess how they have done and the potential to extend. In some instances we are also proposing some additional prohibitions to be added to some individual PSPOs. With that in mind, we would welcome the thoughts of residents regarding the PSPOs established in their communities, and also regarding any further potential alterations that are being proposed.”

This weeks ‘Monday Mind Workout’ is to see if you know the real names of the below:
Good luck!

1.Who is Krishna Pandit Bhanji better known as?

Leeds-based photographer Lee Brown has spent the last two years taking pictures in the Hyde Park Picture House’s public and behind-the-scenes spaces. His own link to the Picture House stretches back several generations to his great, great grandparents, who took his Nana there as a child. Years later, it was to become the setting for one of Lee’s first dates with his wife and has a remained a favourite place for the two of them ever since.

Lee’s striking portraits reveal the characters woven into the history of the Picture House and those helping to preserve it for the future. Each portrait is accompanied by a short text that provides insight into the subject’s connection to the place.

Titled People of the Picture House, the exhibition features portraits of staff, volunteers and visitors who help to make the cinema into the cosy community hub that it is.  The pictures can be seen online here: https://leftbankleeds.org.uk/celebrating-our-friends-hyde-park-picture-house/  (if you click on a picture it will bring up the story behind it). 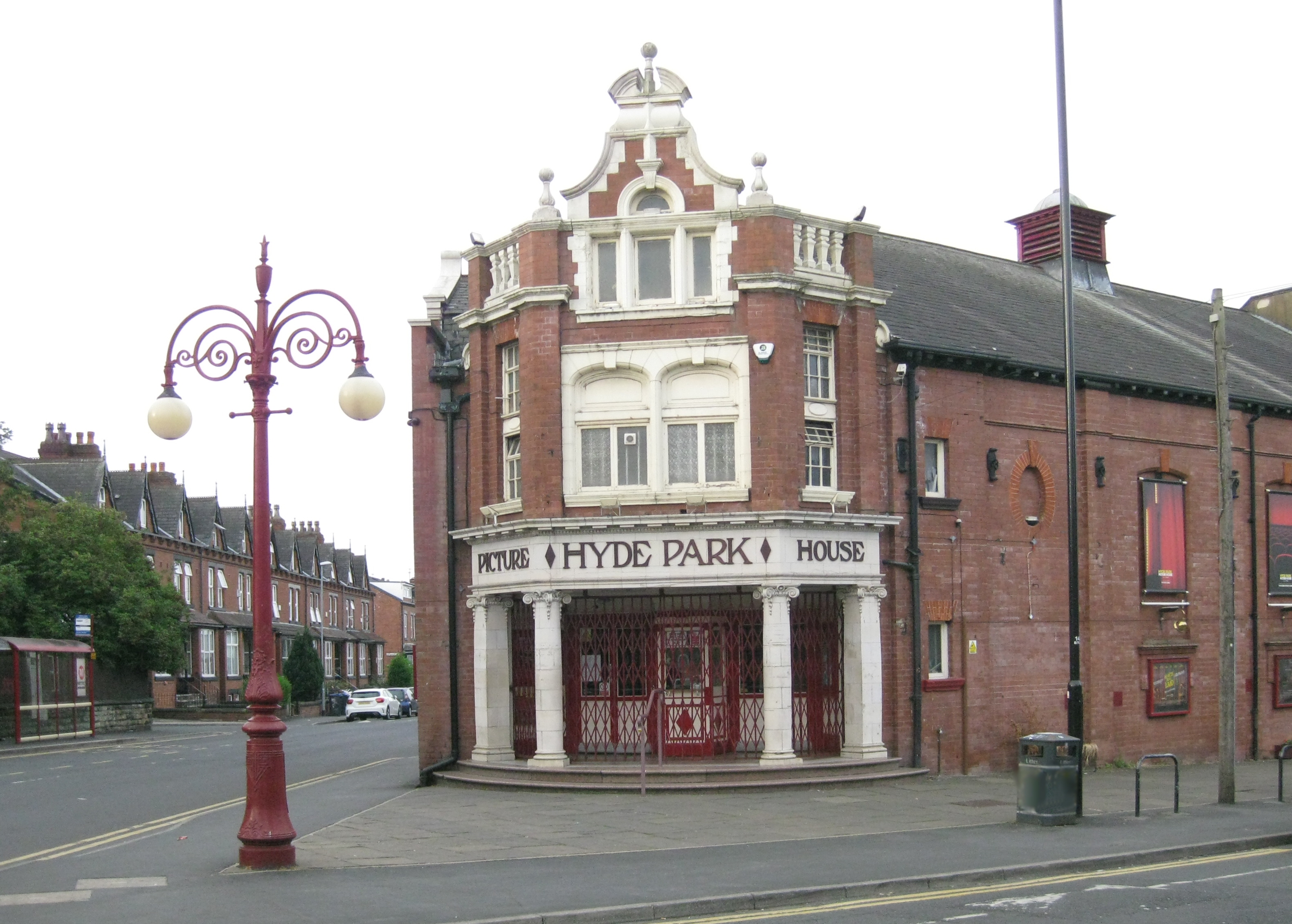 In a series of documentary films available on YouTube, explore the origins of the opera, unearth some of the long forgotten theatres of Leeds, and even confront the age-old question, ‘what is an opera’?

The 4 films can be viewed here

The Leeds Opera Story is produced by Northern Opera Group (northernoperagroup.co.uk) and supported by the National Lottery Heritage Fund and Leeds Inspired.

A reminder that there are more places where you will need to wear a face covering from today.  These are all places where it has been recommended previously but will become mandatory now.

For members of the public, from 8 August the places where you will have to wear a face covering will be expanded to include:

You are also strongly encouraged to wear a face covering in other enclosed public spaces where social distancing may be difficult and where you come into contact with people you do not normally meet.

The market had it’s first cautious re-opening in the beginning of July and is back again on Saturday 8th of August.

The organisers say they were really pleased to be able to bring the market back and that while different to the pre-lockdown normal the event ran smoothly and safely with postiive feedback from customers.

It will be running in the same way in August with precautions were put in place such as stalls being more spaced out to allow for social distancing and a one way system around the market, managing entry to the market and providing sanitiser at the entrance and exit. They will also be managing the number of people and checking that customers are keeping the necessary social distance whilst queueing at the stalls. Stall holders will be taking payment by card wherever possible.
There will be some live music at the event and also the Heart Centre Café on nearby Bennett Road will be selling drinks and food that can be consumed at their tables outside or taken away.

All the information, including the stallholders list and more about the measures taken to make this a covid safe event are here https://headingleyfarmersmarket.com/next-market.php

Roll up! Roll up! It’s time for the Greatest Breeze Show!

This fabulous, fun and free show will have something for all the family.

There are still tickets for the 2.45pm and 4.30pm shows – it is free – click on the link below to book a marked zone:

Throughout August the Greatest Breeze Show will be touring Leeds to bring you something magical in place of our normal Breeze summer activity programme.

The performance will include singers, dancers, magicians, comedians and more. It’s completely free and you can bring up to 6 members of your household. We’ll also be putting in place stringent measures to make sure the experience is safe and socially distanced. We’ll be providing hand sanitising stations, and each family group will have their own distanced pod to sit in on the grass. You can even bring a picnic if you fancy!

The latest data and monitoring has enabled us to quickly identify clusters of cases in Kirkstall and Harehills, and surrounding areas.

The city’s seven day rolling average has also been gradually increasing from 4.1 cases per 100,000 people early last week, to 13.3 as at 5 August.

As part of the city’s outbreak planning, steps are being taken in priority areas in an effort to stop further increase in cases and to stay on top of community transmission.

Council and Public Health England officials are also calling for people in these communities and across Leeds to continue to play their part in keeping themselves and others safe by following the latest advice.

We can all play a part in preventing further spread and restrictions if we wear face coverings, wash our hands regularly, maintain social distancing and self-isolate and get tested if any symptoms appear.

Information on how to stay safe can be found here.

For more details about outbreak planning in Leeds and steps that can be taken to prevent the spread of Covid-19, please visit our website.