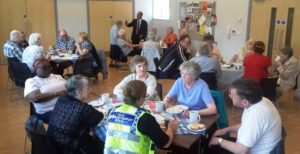 Fantastic event yesterday at Little London Community Centre. Caring Together held an afternoon of Tea, Cakes and Debate to mark the 90th anniversary of the 1928 Representation of the People Act which gave all men and woman over the age of 21 the equal right to vote. Many thanks to all who attended, including local Councillors Javaid Akhtar, Kayleigh Brooks and Sam Pemberton our local PCSO. Those attending spoke of how Woman’s and Men’s roles had changed for most over the intervening years and individual stories and experiences were aired.